This is   a player controller I have been making for some.  I have tested many movement and jumping methods for the player. After much testing, I found it the best player movement solution. I would like to    here from you guys  if you have any suggestions or   found any issues.       Many beginners make platformers as their first game.   So hopefully they can learn something from this.

First you have to setup the inputs for the player.   This asset includes a user input system. Using this input system , we can easily  make custom inputs and give players the ability to change the inputs for moving our character    in the game. To set-up the player inputs, make an empty GameObject  and attach "UserInputSettings.cs".   Here you can  assign any key  to  a specific function. 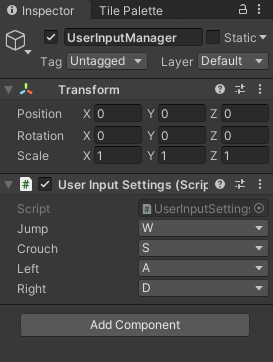 Make an empty GameObject and  Attach  "PlayerMovementController.cs". RigidBody2D and BoxCollider2D components will be automatically  added.  Here you can tweak many variables to fit your player character's needs.

These are the variables in Player Movement Controller: 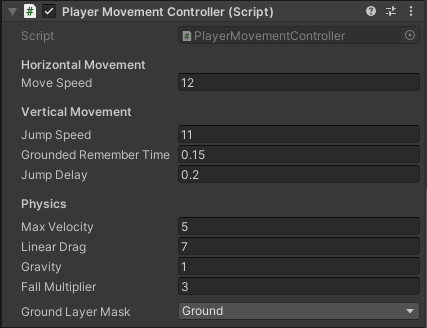 The base of our player is done. This assets also include player animations controller. First make an empty GameObject Under the child of Player Component  and make another Gameobject the child of that  object we just made before. Like this:

Obviously you can name them anything you want.  Now set the position of "CharacterHolder" to -1 along Y.

And set the position of "CharacterAnimatons" to 1 along Y. The reason why we are creating other gameObject for holding the character and character animations, is that we want to change the localTransform of Player Sprites  without effecting RigidBody2D and BoxCollider2D of the Player. In PlayerAnimations, You can create animations for the player. 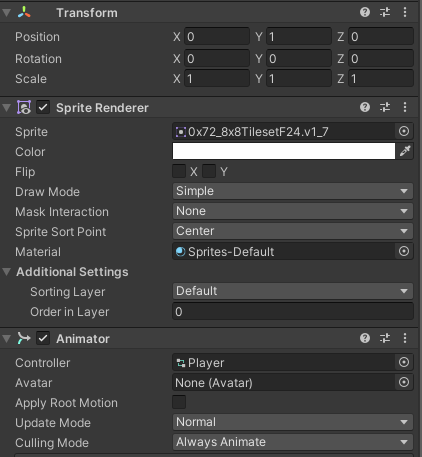 Now under the Player GameObject, we can setup jump squeeze  animations. 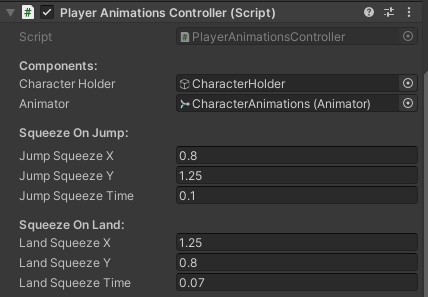 Bring in the CharacterHolder GameObject  and animator components of the PlayerAnimations in the fields and  set the values for jump and land squeeze.

You have to make four bool parameter is your  animator like this:

If you have any other questions, feel free to ask in the comments. Also   criticism and suggestions for improvement of the assets will be highly appreciated. Enjoy! 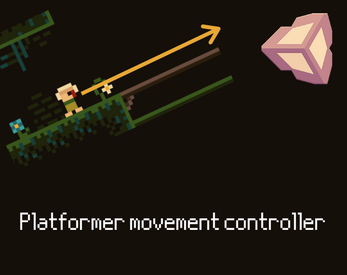